Finding Ways to Use Big Data to Help Small Shops


Brian Janezic, 27, was in the equipment room of one of the two Auto Wash Express self-service locations he owns in Tucson, going through his cleaning supplies and vending machine items to determine what to reorder, when it hit him. “We have machines that automatically size and wash a car, mix chemicals, activate pumps, turn on lights — and here I am still counting inventory by hand.”

An online search introduced him to FileMaker Pro, a software product well suited to small businesses and tailored to the iPads that Mr. Janezic envisioned for himself and his three remote employees — not to mention the employees serving the six Arizona Auto Wash Express locations owned by his parents. “Now we can pull up any of our sites and see what’s on hand,” he said, adding that the FileMaker software “creates a PDF of a purchase order for us to send to one of our local suppliers or an online supplier.”

That was only part of the savings. Before Mr. Janezic installed sensors linked to FileMaker on each location’s eight drums of carwash chemicals — windshield bug removal solutions, pre-wash chemicals for tires, waxes, glass cleaners — monitoring use meant taking a yardstick to each drum, noting liquid levels and measuring again a week later. Gallons consumed divided by the number of cars washed told him how much of each solution was consumed per wash.
“Now we’re able to monitor those levels continuously,” he said. “So instead of having two data points in the span of a week, we’ll have 500 data points. And we can do that across our entire company. We might want to see how much pre-soak we’re using, because we have a standard we want to keep within.” So the new system improves quality control, and it can send a text message or email alert should, say, a valve stick open, potentially draining a $250 drum of soap.

A wealth of information that some call big data is becoming increasingly available to small businesses. Such information was once available only to big corporations with vast computing power and deep information technology departments — and more recently to online start-up companies with data-mining capabilities.

In 2010, just 1.7 percent of small businesses were using business intelligence software, according to a survey of companies with fewer than 100 employees conducted by IDC, whose analysts provide information technology advice to businesses small and large. By last year, 9.2 percent had adopted such tools, reported Ray Boggs, a small-business market analyst at IDC, citing easier-to-use products and lower prices as prime drivers of the increase.

“You don’t need a degree. You don’t need a manual,” said Ramon Ray, co-creator and host of the annual Small Business Summit, where entrepreneurs meet with technology and marketing experts. “You can drag and drop spreadsheets, upload a file — even from your phone. If you have fleets of vehicles, you run those vehicles better; you can staff better, because you know where your employees should be, and when. The new tools provide better customer insights, so you know better what to sell them or what not to sell them; you can see which of your products has the best profit margin. You don’t have to do things on gut check anymore.”

“Say you’re a mom-and-pop dry cleaner and somebody says on Twitter, ‘My dry cleaner is terrible. They broke all my buttons,' ” said Leyla Seka, senior vice president and general manager of Desk.com. “That would show up in Desk. And then you could respond: ‘Sorry, please bring your shirts back and we’ll fix them immediately. And here’s a 20-percent-off coupon.’

Chris Mittelstaedt, founder of the FruitGuys, based in South San Francisco, Calif., said the software had helped his 90-employee company respond to and better interpret the 1,000 to 1,300 emails fielded weekly by customer service representatives. The FruitGuys sell fresh fruit to workplaces across the country. Until a year ago, before the company agreed to pay about $40 a month to Desk.com, its four customer service representatives tended to work in isolation. Now, a shared email inbox helps them to spot information and trends. It also speeds response time.

“Embarrassing as it is to admit, there’s some basic data that we didn’t have before, things like how many emails per week and our response time,” Mr. Mittelstaedt said. “It often took us over 24 hours to get back to people, which was not acceptable. Now, we’re getting back to customers and solving complicated issues within two hours.”

The company also gets helpful business intelligence, according to Nicole Wagner, who is the chief of customer service. “We’ll see trends,” she said, including late deliveries and multiple emails like, “ ‘Hey, we really loved the avocados this week’ — information we can pass on to our buyers.”

“We’ve always been able to get waitstaff check averages,” said Andy Husbands, who is chef and owner at Tremont 647, a 100-seat restaurant in Boston. “But now we’re able to bore down deeper.” On a new performance page for a star waiter named David, up popped a $5 brunch item, specialty pop tarts. Mr. Husbands realized David got virtually every Sunday morning table he served to order at least one. It was no surprise, then, that Mr. Husbands promptly invited David to share his pop-tart-selling prowess at a premeal staff meeting.

Mr. Husbands and his managers use such performance pages and other business metrics, many pertaining to customers, through a cloud-based tool called Swipely. Angus Davis, the founder and chief executive of Swipely, calls it “an affordable on-ramp to big data.” By replacing so-called payment processing companies that exist between merchants and the banks that issue consumer credit cards, Swipely gains access to a wealth of data, which it analyzes and presents on easy-to-understand dashboards, “more than half the time at little or no cost,” according to Mr. Davis.

“The crux of Swipely is using the data behind transactions to help businesses make smarter decisions — bringing the same tools and technologies that online companies have been using for years to the 95 percent of retail that happens off line,” Mr. Davis said. “We’ve built specialized tools for retailers and restaurants that answer the types of questions those small businesses have, like which item on their menu is most likely to turn a first-time customer into a repeat customer. But answering that question requires us to look at a tremendous amount of data.”

Examining his own data, in fact, prompted Mr. Janezic to look beyond his family’s Auto Wash Express locations. After enhancing his FileMaker Pro inventory management system on a different platform, he created a spinoff enterprise called WashStat, which he now sells to other carwash owners. That, too, is business intelligence.
Posted by CDR-Data at 3:25 PM No comments:

McLean’s AppTek is latest to be ‘aqui-hired’ by eBay 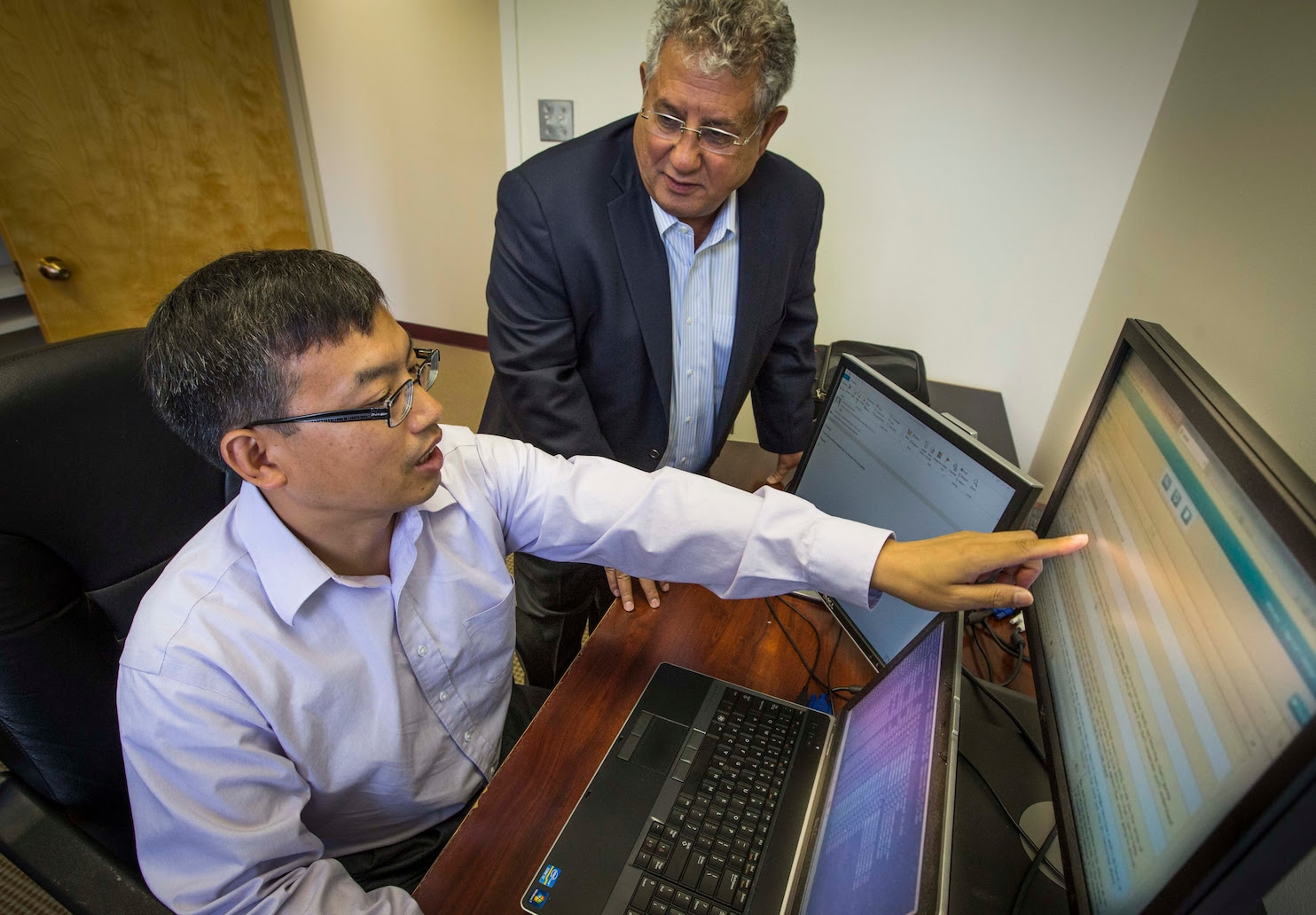 About 18 months ago, eBay faced a linguistics problem.

The e-commerce giant had about 650 million items listed for sale, by 25 million people worldwide.

Interested buyers typically searched for products by typing words into a query. The site would then find items whose descriptions contained those words, written by the seller.

But what if the buyer and seller didn’t read or write the same language? Buyers were limited to items with descriptions they could understand, and sellers could only reach a subset of the global market.
So the company started investing in text translation, aiming to automatically translate descriptions into the buyer’s preferred language. As part of this project, eBay recently agreed to acquire translation software developed by AppTek, a McLean-based technology company.

AppTek is the latest target of an eBay “acqui-hire” — a strategy in which a business buys a company, or its intellectual property, with the intent of hiring its technology development talent. Between 2008 and 2014, eBay has completed more than 35 acquisitions; since 2010, 80 percent of the founders of those companies have remained at eBay, according to eBay. As per the agreement between AppTek and eBay, about eight of the Virginia company’s 20 employees — including its co-founder, Mudar Yaghi — are joining eBay’s translation team.

“These language scientists are few and far between when you scan the globe,” said Wendy Jones, eBay’s vice president of geographic expansion and cross-border trade.

She noted that in this case, the experts who developed the software are just as valuable to eBay — if not more so — than the software itself. “What we’re trying to do is marry the [translation] capability with all [of eBay’s] insights around e-commerce,” Jones said.

For instance, Jones said, eBay is trying to make its translation software more sophisticated — shifting from, “Is this translated correctly?” to, “Have I done this in a way that is compelling enough to the consumer so that they’re going to behave differently?”

The AppTek deal is part of eBay’s “ambitious journey to extend our footprint into markets we traditionally haven’t focused on,” Jones said. Better translation could allow more global online trade, she said — not only among large nations and newer markets such as Brazil, Russia, India and China, but also in parts of Europe such as France, Italy and Spain.

Before deciding to acquire AppTek’s technology, eBay had been developing its own software in-house, called “eBay Machine Translation,” Jones said. The division, which AppTek’s former employees will join, is currently made up of about two dozen developers.

“We started with the [Brazil, Russia, India and China] focus, but the bigger opportunities are in the existing markets where eBay already has strong, healthy business,” Jones said, explaining that people who already use the site regularly will soon find many more options than they did before every time they search — five, six, seven times as much, she added.

For AppTek, the sale offers an opportunity to narrow its focus on speech recognition software, co-chief executive Mohammad Shihadah said in an interview. Before the sale, the company’s time, talent and resources were divided between newer technologies and machine translation.

For instance, AppTek hopes to market its technology to TV news sources for closed-captioning, Shihadah said. AppTek’s speech recognition software is currently being used at al-Arabiya, an Arabic-language news network, for subtitling and captioning.

The company is also working on speech recognition for mobile phone users, as well as voice response systems.

Compared to the machine translation software they sold to eBay, he said, “we believe this is equally important in terms of the future.”
Posted by CDR-Data at 11:13 AM No comments: